All cells making up the human body contain the same DNA in their nucleus, the DNA entailing about 30,000 genes and each gene containing instructions for a protein. Despite this sameness, the cells in different parts of our body are very different due to many factors, a key one being that the level of expression of genes into protein is highly regulated and differs strictly from cell to cell. One rather common regulation mechanism involves methylation of one of the four bases of DNA, cytosin. Researchers find that the long DNA in human cells show spots of methylated cytosins, the methylation being correlated with the expression level of the genes near the spots. In fact, medical researcher relate several cancers to improper methylation of DNA. Despite the common occurrence of regulation by methylation, researchers have little understanding how methylation, that changes an H (hydrogen atom) for a CH_3 (methyl group) here and there, i.e., just adds small bumps on a rather bulky DNA molecule, affect the physical properties of DNA such that expression levels are altered. It was found that there are proteins that can recognize the CH_3 groups, i.e., the bumps, on the DNA, but researchers have a hunch that methylation does affect DNA properties directly, i.e., without protein markers, but do not know which properties. In a collaboration between bioengineers measuring the passing of DNA through nanopores and computational biologists simulating this process with NAMD (see also the Nov 2005 highlight stretchable DNA) first hints emerge that methylation does in fact alter DNA's ability to stretch itself through a nanopore. As reported recently, pulling DNA electrostatically through nanopores is easier for methylated than for unmethylated DNA, as seen both in experiment and simulation. The findings promise insight into an important chapter in the field of genetic control. More on our methylated DNA website. See also our recentbiotechnology review.

A group led by Brent Heuser, a University of Illinois professor in Nuclear, Plasma and Radiological Engineering (NPRE) is nearing the end of its first year of research to develop improved cladding for nuclear fuel rods. The $3.5 million U.S. Department of Energy funded project is in response to the 2011 nuclear disaster at the Fukushima site in Japan. The accident scenario that occurred in Japan is extremely unlikely in the U.S. However, a proactive response to develop improved nuclear fuel is considered prudent within the worldwide nuclear industry. 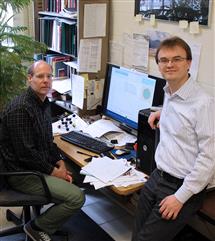 Tomasz Kozlowski (right) is providing computer simulation support for the DOE-funded multi-institutional project to develop improved cladding for nuclear fuel rods led by NPRE professor Brett Heuser (left).
Computer simulation led by Tomasz Kozlowski, an assistant professor in NPRE, is supporting research on the experimental side. Kozlowski is one of a growing number of researchers taking advantage of high-performance computers such as the Illinois Campus Cluster to predict optimal outcomes prior to experiments and in some cases to explain the outcomes afterward.

The current standard in cladding is Zircaloy, a zirconium-based alloy. Zircaloy reacts with steam at high temperature. The resulted zirconium oxide liberates hydrogen, which is a flammable gas.

“All my research is computational,” Kozlowski explains. “I am able to simulate nuclear accidents by projecting the deterioration of reactor conditions due to age or fuel degradation.That involves heavy simulation of fluid flow, neutron transport and material performance.”

“High-performance computers have become essential to research in many disciplines across the Illinois campus, from Big Data applications, to astronomy, biology, and chemistry on through the alphabet to zoology,” explained Chuck Thompson, assistant dean and chief information officer for the College of Engineering. “The Illinois Campus Cluster program is a campus-wide resource that helps meet this need for research computing cycles.”

“That is theoretically a very accurate method, but because it’s computational intensive, it can be very slow. The Campus Cluster allows me to quickly calculate the neutron and power distribution inside the reactor, which is almost as good as an experiment.”

That team consists of researchers from Illinois, University of Michigan, University of Florida and the Idaho National Laboratory with manufacturer ATI Wah Chang from Albany, Ore., assigned to help produce new materials. The United Kingdom has kicked in another $1.5 million to the effort by joining the American partners with some principal investigators from the University of Manchester.

The goal of the current grant is to propose another material that could be a replacement for Zircaloy or a coating that that would prevent water from coming into contact with the Zircaloy.

Kozlowski indicates that convincing industry to replace anything that it is currently using will be difficult, but not impossible. The U.S. DOE philosophy is to develop new or modified fuel materials to be deployed in existing reactors.

“Changing the cladding material would take around 15-20 years,” Heuser indicated. “We’re hopeful that if we can find a coating that works, that the time frame would be much shorter. The goal would then be deployment on a shorter time scale.”

In his computer modeling, Kozlowski is testing the response of the reactor when factoring in other variables such as a change in temperature.

“Many of the possible candidates for coatings may have negative effects on reactivity, and required fuel rod replacement more often or increasing the amount of fissle material required for the reactor to become critical,” Kozlowski said.

“In envisioning ways to make nuclear fuel safer, the biggest problem is the cladding, which is the first line of defense” Heuser concluded. “From that standpoint, computation is proving very important. We want to take an intelligent approach to performing calculations that will guide us.”

Read the News-Gazette story on the project.