To pack two meters of DNA into a microscopic cell, the string of genetic information must be wound extremely carefully into chromosomes. Surprisingly the DNA’s sequence causes it to be coiled and uncoiled much like a yoyo, scientists reported in Cell.

“We discovered this interesting physics of DNA that its sequence determines the flexibility and thus the stability of the DNA package inside the cell,” said Gutgsell Professor of Physics Taekjip Ha, who is a member of the Carl R. Woese Institute for Genomic Biology. “This is actually very elementary DNA physics. Many people thought we should have known this many decades ago, but there are still surprises in the physics of DNA.”

The DNA is packaged into chromosomes, which resemble beaded bracelets. The string of DNA is coiled around beads, called histones, to create nucleosomes. These nucleosomes are braided together into beaded strings that are intricately woven into chromosomes.

Scientists knew the DNA could be uncoiled from the nucleosome, but it was assumed that the two ends were symmetric, meaning uncoiling the DNA would be like untying a shoe. University of Illinois researchers found that the DNA is actually very asymmetric, like the string wrapped around a yoyo. Pulling on one end of DNA will simply tighten the coil while pulling on the other will cause it to uncoil like a yoyo.

The physics of this nucleosome packaging is determined by the DNA’s sequence, which makes the strand of DNA flexible enough to satisfy two conflicting principles: it has to be stable enough to compact DNA, but dynamic enough so the strand can be uncoiled and read to make proteins.

“There are many good studies that show that if you change the sequence of the gene, then it will affect other things. Different proteins may be created because they require certain sequences for binding and so on,” said Ha. “But no one had really thought about sequence changes having an effect on DNA physics, which in turn cause changes in the biology.”

Ha’s research has shown that it is easier for the cell’s protein-making machinery to read from the “weak” end of the nucleosome that uncoils more easily. They believe that genetic mutations related to diseases, like cancer, alter the stability of the nucleosome.

“This could have a major impact on how the information is read out and how different proteins are produced,” Ha said. “For example, cancer-fighting proteins or cancer-causing proteins may be made differently depending on the changes in DNA flexibility and stability caused by mutations.”

Ha plans to use next generation sequencing to determine the flexibility of an entire genome. He hopes to create the first genome-wide map of physical properties. He also wants to find out if mutations can make the DNA easier or more difficult to read.

“Plasmonic nanostructures are of great current interest as chemical sensors, in vivo imaging agents, and for photothermal therapeutics,” explained David G. Cahill, a Willett Professor and head of the Department of Materials Science and Engineering at Illinois. “Applications in imaging and sensing typically involve the emission of light at a different wavelength than the excitation, or ‘secondary light emission’. The interpretation of resonant secondary light emission in terms of fundamental processes has been controversial for 40 years. 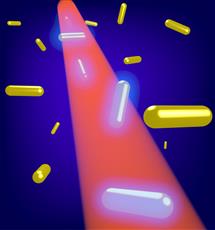 “In this work, we point out that resonant electronic Raman scattering and resonant fluorescence may both be useful descriptions of the secondary emission," added Cahill, who is also a researcher at the Frederick Seitz Materials Research Laboratory. “Better understanding of these principles and their limitations can result in improved biological and medical imaging modalities.”

Fluorescence is a relatively familiar process by which light of one color or wavelength is absorbed by a material, e.g., an organic dye or a phosphor, and then light is emitted at a different color after a brief interval of time. In Raman scattering, the wavelength of light is shifted to a different color in an instantaneous scattering event. Raman scattering is not common in everyday life but is a critical tool of analytical chemistry.

“Light emission from plasmonic nanostructures at wavelengths shorter than the wavelength of pulsed laser excitation is typically described as the simultaneous absorption of two photons followed by fluorescence, which is used a lot in biological imaging,” explained Jingyu Huang, first author of the paper that appears in the Proceedings of the National Academy of Sciences. “However, we found that by modeling the emission as Raman scattering from electron-hole pairs can predict how the light emission depends on laser power, pulse duration, and wavelength.

“Since we understand more of the mechanism of this kind of light mission, we can help to design the biological and medical imaging experiments better, and at the same time we can also have more insight into the broad background of surface-enhanced Raman scattering which is also related to this kind of light emission," Huang added.