Although AMPA receptors (AMPAR) are known to play a key role in learning and memory, their exact role remains unclear. Previous studies tracking AMPAR in live neurons suggested that they are relatively free to diffuse and located in extra-synaptic pools. This led to the suggestion that during learning, AMPA receptors wait outside the synapse until space is made available within the synaptic membrane. CPLC postdoc Sang Hak Lee in the Selvin group showed, using super-resolution microscopy, that the majority of AMPAR is not free to diffuse, but rather confined to nano-domains in the synapse. This breakthrough was made possible by the development of ‘small’ quantum dots (sQDs; ~10 nm) in the CPLC (see Cai et al. Angew. Chem. Int. Ed. 2014). In contrast to the bulky labels used in the prior studies, sQDs enable labeled receptor proteins to enter the confined space of the synaptic cleft and to be tracked. This result was also verified using smaller, organic fluorescent dyes. Future work is still needed to determine the mechanism by which AMPAR enter the synapse and contribute to acquisition of memories. Refer to:Lee et al. eLife (2017).

Three University of Illinois at Urbana-Champaign units—the Department of Mathematics, the Department of Physics, and the Graduate College—are the first to partner with the African Institute for Mathematical Sciences—South Africa (AIMS-SA) through its newly launched Institute Partners Programme. The partnership was formalized at a teleconferenced ceremony this morning, held jointly at the Alice Campbell Alumni Center in Urbana and at AIMS-SA in Cape Town, South Africa. The three units presented AIMS-SA with a ceremonial check for annual dues in the amount of $15,000.

A portion of the annual dues will be applied toward the cost of sending U. of I. faculty to Cape Town to teach short courses, participate in workshops, and recruit graduate students at AIMS-SA.

U. of I. Professor of Mathematics Steve Bradlow, who taught at AIMS in 2013 and was instrumental in setting up the partnership, comments: “AIMS is a very unique, very inspirational institute.  Its mission —to quote from one of its publications—‘is to enable Africa’s brightest students to flourish as independent thinkers, problem solvers and innovators capable of propelling Africa’s future scientific, educational and economic self-sufficiency.’ In my experience, to teach there is to feel you’re playing a small part in something big and valuable. It’s an experience that I highly recommend to my colleagues here!”

AIMS Professor Barry Green shares, “We are grateful to Steve Bradlow and colleagues at the University of Illinois for jointly setting up this program with AIMS-South Africa—the first group to formally become members of the AIMS-SA Institute Partners Programme. We look forward to the exciting interaction this partnership will facilitate, contributing to our goal of building science in Africa."

U. of I. faculty celebrated with a sparkling-apple-cider toast and cake. Pictured left to right are Jared Bronski, Richard Laugeson, Rob Leigh, Laura Green, Steve Bradlow, Matt Ando, Tom Nevins, Nigel Goldenfeld, and Dale Van Harlingen.
Chair of the Department of Mathematics and Professor Matthew Ando, remarks, “This is an important partnership.  We are now an institutional sponsor that will make a difference for students at AIMS-SA, and it will also make a difference for us in what our faculty and students can do. This is our first international sponsorship and it is a wonderful undertaking.”

Head of the Department of Physics and Professor Dale Van Harlingen welcomes the opportunity to send faculty to participate in AIMS-SA workshops and course teaching, and to having AIMS students come to Illinois. In a toast to the new partnership, Van Harlingen shares his hopes for the new partnership: “To the future that this program and others like it will bring—a future in which students from any place in the world, regardless of background, race, or ethnicity, will have an opportunity to learn and contribute to mathematics, science, and engineering at the highest levels, as we strive to understand our universe and solve pressing societal problems in health, energy, and the environment.” 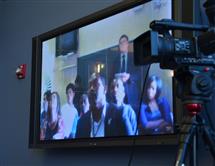 Faculty and staff at AIMS-SA are joined by a representative of the US Embassy at AIMS in Cape Town, South Africa, for the teleconferenced ceremony.
U. of I. faculty present for the teleconferenced ceremony were, from the Department of Mathematics, Matthew Ando, Steve Bradlow, Tom Nevins, Richard Laugesen, and Jared Bronski; and from the Department of Physics, Dale Van Harlingen, Rob Leigh, Nigel Goldenfeld, and Laura Greene. Other supporters who helped establish the partnership, but could not be present, include Graduate College Dean Deba Dutta, physics Nobel laureate and Professor Tony Leggett, and math Professor Jayadev Athreya.
If you have questions about the Department of Physics or ideas for other stories, contact Siv Schwink, 217.300.2201